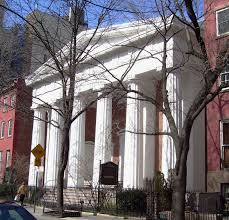 For the Fourth of July, First Things has a fun post about a traditional American pastime: electioneering by clergy. “For better or worse,” Mark Tooley writes, “clergy have always been involved in U.S. politics.” It’s often for worse. Tooley writes about the presidential election of 1884, in which Democrat Grover Cleveland, the mayor of Buffalo, defeated Republican Senator James G. Blaine of Maine.

The campaign was a close and ugly one. Cleveland, seen as a crusading reformer, was revealed to have fathered an illegitimate child. Protestant pastors drummed up protests. “It is painful to think of his offenses,” wrote one, “and shameful, infinitely shameful, to have such a man commended to the suffrages of a Christian nation.” The election seemed in Blaine’s grasp.

Then, just days before the election, Blaine appeared at a rally of 500 clergy in New York City. The Rev. Samuel D. Burchard of the Thirteenth Street Presbyterian Church in Greenwich Village (top) introduced Blaine with the following words:

We are Republicans and don’t propose to leave our party and identify ourselves with the party whose antecedents have been rum, Romanism, and rebellion. We are loyal to our flag. We are loyal to you.

A little explanation may help. “Rebellion” was a reference to the Civil War, still fresh in people’s memories. “Rum,” everybody understands. And “Romanism” was a reference to Roman Catholicism, which Protestants saw, like Southern secession, as anti-American. Democratic-leaning newspapers gleefully broadcast the remark throughout the state. Offended Catholics went for Cleveland. Estimates are that Burchard cost Blaine 50,000 Catholic votes in New York. In a razor-tight race, that probably gave Cleveland the election; he won New York by 1200 votes, which put him over the top in the electoral college.

Blaine complained, understandably, that Burchard was a fool. For his own part, Burchard defended his remark as a clever alliteration. It is memorable, after all.