Some thoughts of mine on Justice Scalia at Commonweal. A bit from the end that is connected with our Tradition Project:

His optimism is perhaps nowhere more evident than in his Establishment Clause opinions, which express his appreciation for the traditions of the American accommodation of law and religion, and his hopeful expectation that American people would maintain, cherish, and be sustained by that inheritance. That optimism underlies much of his jurisprudence. In constitutional law, he believed that tradition is itself an independently powerfully reason in the law’s interpretation. That emphasis on American tradition led him to the view (often expressed in dissent) that “acknowledgement of the contribution that religion has made to our Nation’s legal and governmental heritage” is permissible under the Establishment Clause.

In my judgment, he was largely correct about this. Even more, however, Scalia was convinced that the American tradition of public religion—public prayer, for example—was a uniting force of civic fellowship. Hearing a public prayer in a tradition different from one’s own, he argued in his Lee v. Weisman dissent, would not lead to public discord, but to greater harmony, mutual understanding, and even civic “affection.” How old-fashioned this view seems amid today’s cacophony of demands for validation based on identity or interest group.

Yet it is in his free-exercise jurisprudence that Scalia’s optimism in the commonplace American character was tested and stretched to the breaking point. His seminal contribution was Employment Division v. Smith, where the Court held that a neutral law of general application did not implicate the Free Exercise Clause even if the law had the effect of burdening religion. Many critics of Smith (I am one) miss that what may first appear as a hard and parsimonious rule for religious freedom is closely coupled in Scalia’s opinion with a deep faith and optimism that people, acting through their legislatures, would do right by their religious brethren, would be magnanimous and charitable toward them whenever they could be:

Scalia was determinedly sanguine in his opinions about American solicitude for religion. Religious liberty and tolerant good will could never be eradicated from the core spirit and innate generosity of the American people. The people might go astray; they might make mistakes. But in the long run and in the main, the best and most secure outcomes for religious freedom will reflect popular negotiations rather than Court-imposed “solutions.”

So sanguine was he that even as late as 2012, Scalia—a deeply faithful and committed Catholic—could obdurately persist in telling John Allen in an interview that “if the bishops want an exception from the law [in this case the contraception mandate in Obamacare], they should try to get it through the democratic process…. Americans are very generous about accommodating religious beliefs.” The Congress that passed the Religious Freedom Restoration Act in 1993 was more pessimistic in its long-term assessment of the character of the American people. Alas, it was probably more accurate as well.

In fact, one may wonder whether Justice Scalia’s faith in the American people in the long run will be rewarded. Certainly he must have had his doubts. Especially toward the end, he must have known and regretted that his “wins” were so “damn few.” So they were, and so, perhaps, they will be. But to Scalia’s great credit, those doubts and regrets never appeared in his written opinions. And over the truly long run, optimism is not so bad a bet.

In April, Image Books will release “Believers, Thinkers and Founders: How We Came to be One Nation Under God” by Kevin Seamus Hasson (Founder and President Emeritus of the Becket Fund for Religious Liberty). The publisher’s description follows:

In Believers, Thinkers and Founders: How We Came to be One Nation 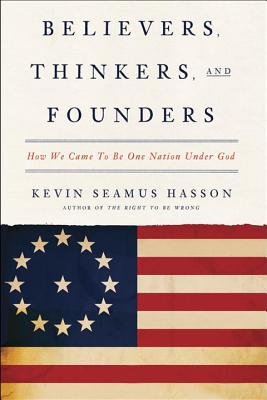 Under God,  Kevin Seamus Hasson—founder and president emeritus of the Becket Fund for Religious liberty—offers a refreshing resolution to the age-old dispute surrounding the relationship of  religion and state: a return to first principles.

“The traditional position,” writes Hasson, “is that our fundamental human rights—including those secured by the First Amendment—are endowed to us by the Creator and that it would be perilous to permit the government ever to repudiate that point.” America has steadfastly taken the position that there is a Supreme Being who is the source of our rights and the author of our equality. It has repeated that point for well over two hundred years throughout all branches and levels of government.

Never mind, says the secularist challenge. God is, to put it mildly, religious. Religion has no place in Government. So God has no place in Government. It’s just that simple.
But for the government to say there is no creator who endows us with rights, Hasson argues, “is to do more than simply tinker with one of the most famous one-liners in history; it is to change the starting point of our whole explanation of who we are as Americans.”

He proposes a solution straight from the founding: the government acknowledges the existence of God who is the source of our rights philosophically but not religiously. This idea of the “Philosophers’ God” is a conception of God based not on faith but on reason. Hasson suggests that by recognizing the distinction between the creator of the Declaration of Independence and the God of our faith traditions, we may be able to move past the culture wars over religion that have plagued the country.

In Believers, Thinkers, and Founders, Hasson examines the idea of the “Philosophers’ God” while looking at a host of issues—including the Pledge of Allegiance, prayer at public events, and prayer in public schools—as he demonstrates how we can still be one nation under God.

In January 2015, three attackers walked into the office of the satirical magazine, Charlie Hebdo, in Paris, opened fire and killed twelve people, including a Muslim policeman, in the deadliest terrorist attack on France for 50 years. We live in a time of suspicion and fear, not least because religion has returned to the centre stage of collective memories in Europe and in the United States. Amidst claims of threats to national identities in an era of increasing diversity, should we be worried about the upsurge in religious animosity in the United States, as well as Europe? Paola Mattei and Andrew Aguilar show that French society is divided along conflicts about religious identity, increasingly visible in public schools. Republicanism, based on the solidarity and secularism, is viewed by many as the cause of discrimination and unfairness against minority groups. Policies invoking laïcité are frequently criticised as a disguised form of Islamophobia. Secular Institutions, Islam, and Education Policy suggests, on the contrary, that secularism in France is a flexible concept, translated into contradictory policy programmes, and subject to varying political interpretations. This book presents original data showing how schools have become, once again, a central theatre of political action and public engagement regarding laicité, an ideal grounded in the republican origins of the public education system in France.