For our readers in Europe, Georgetown’s Berkley Center will host what looks to be a fantastic conference in Rome this weekend, “Christianity and Freedom: Historical and Contemporary Perspectives.” The conference, which boasts an all-star lineup, will take place at the Pontifical Urbaniana University. Here’s the organizers’ description:

From Cairo and Damascus to Tehran and Beijing, religious freedom is under siege. Ironically, it is Christianity—a faith that contributed decisively to the rise of religious liberty—that now finds itself increasingly persecuted around the world. In view of this global crisis, Georgetown University’s Religious Freedom Project will host a two-day conference in Rome highlighting Christianity’s contributions to the understanding and practice of freedom for all people. The conference will present findings from a two-year study by dozens of scholars concerning Christianity’s contributions to freedom. This event is co-sponsored by Baylor University’s Institute for Studies of Religion and is made possible by a generous grant from the Historical Society’s Religion and Innovation in Human Affairs Program.

Next month, Random House publishes The Original Atheists, an anthology of 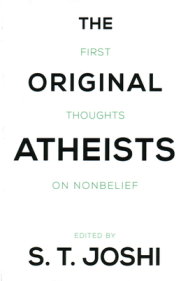 This is the first anthology ever published to feature the writings of leading eighteenth-century thinkers on the subjects of atheism, religion, freethought, and secularism.

With a comprehensive introduction providing the intellectual and cultural context of the essays, this outstanding compilation will be of interest to students of philosophy, religious studies, and eighteenth-century intellectual history.

Next spring, Harvard will publish The Evangelical Origins of the Living

The New Deal is often said to represent a sea change in American constitutional history, overturning a century of precedent to permit an expanded federal government, increased regulation of the economy, and eroded property protections. John Compton offers a surprising revision of this familiar narrative, showing that nineteenth-century evangelical Protestants, not New Deal reformers, paved the way for the most important constitutional developments of the twentieth century.

Following the great religious revivals of the early 1800s, American evangelicals embarked on a crusade to eradicate immorality from national life by destroying the property that made it possible. Their cause represented a direct challenge to founding-era legal protections of sinful practices such as slavery, lottery gambling, and buying and selling liquor. Although evangelicals urged the judiciary to bend the rules of constitutional adjudication on behalf of moral reform, antebellum judges usually resisted their overtures. But after the Civil War, American jurists increasingly acquiesced in the destruction of property on moral grounds.

In the early twentieth century, Oliver Wendell Holmes and other critics of laissez-faire constitutionalism used the judiciary’s acceptance of evangelical moral values to demonstrate that conceptions of property rights and federalism were fluid, socially constructed, and subject to modification by democratic majorities. The result was a progressive constitutional regime—rooted in evangelical Protestantism—that would hold sway for the rest of the twentieth century.

Last summer, I wrote about a constitutional challenge to yoga classes in California public schools. When a school district near San Diego added yoga to its elementary-school gym program, some parents complained. Yoga, they said, is a Hindu discipline, and including it in a compulsory gym class violates the Establishment Clause. A state trial court disagreed, holding that the school district had removed all religious references, so that what remained was simply a stretching class for kids.

It turns out that similar litigation is unfolding across the world in India, the place where yoga originated. But there, the courts appear to be taking a harder line. The plaintiffs in the Indian case want that country’s Supreme Court to order public schools to include yoga in the curriculum. They cite a 2005 study showing that yoga is important for students’ mental and physical health. The Supreme Court hasn’t ruled yet, but has expressed concern about ordering public school students to take yoga classes. Why? Because Indian public schools are officially secular, and yoga is a religious practice. At oral argument this fall, the court said that parents from minority religions–Christianity and Islam, for example–might object to a requirement that their children engage in Hindu exercises at school. The court has asked representatives of the minority religions to appear in the litigation as third parties to state their views.

What explains the different reactions of the American and Indian courts? Much has to do with the different cultural understandings of yoga. Here in the US, most people who do yoga don’t think of it as religious. Spiritual, yes, in the sense that it creates a sense of inner peace, but not religious. Oh, people may understand that yoga has Hindu roots and that some elements, like the salutation to the sun god and chanting the word “Om,” have religious meanings. But these aspects of yoga intrude very little on their experience. “Sure, yoga is religious for some,” they might say, “but not for us. Maybe other people think they’re greeting the sun god, and that’s fine. But we’re just stretching.” So when a public school says it has removed the religious elements of yoga and retained the secular, most Americans would find that position plausible.

The difficulty is that yoga, as traditionally understood, doesn’t work that way. In traditional understanding, yoga is itself a religious act. The postures themselves lead the practitioner to God, whether the practitioner intends this or not. In traditional understanding, in other words, one can’t separate the religious and secular aspects of yoga and one really shouldn’t try. Indeed, some American Hindus object to the way our popular culture treats yoga as a designer gym routine. Much as many American Christians seek to “Keep Christ in Christmas,” the Hindu American Foundation has mounted a campaign to “Take Back Yoga” for the faith.

Perhaps yoga means one thing in one cultural context but something else in another. You’d have to think, though, that judges in yoga’s home country have a pretty good sense of what the practice is all about. The parents in the California case, who have appealed the trial court’s ruling, might want to have a look at the Indian court’s ultimate decision.