For those who are interested, next month I’ll be giving a faculty workshop at Università LUMSA (Libera Università Maria SS. Assunta) in Rome. The workshop, sponsored by the university’s law faculty, will take place on March 7. I’ll present my current draft, “Of Human Dignities,” a reflection on the incompatible understandings of dignity in contemporary human rights law, especially with respect to religious freedom . Details about the event are here. My talk will be in English. CLR Forum readers in Italy, please stop by and say hello!

For those who are interested, I see that Oxford University Press has added my lecture on Mideast Christians, which I delivered last year at the Lanier Theological Library in Houston, to its online legal research library. The Oxford link is here. Thanks!

On April 20, the Jewish Center in New York will host its annual Hanno Mott Lecture on Jewish Ethics.  This year’s lecture is entitled “How Should Our Faith Inform The Laws of A Liberal Democracy?”  The lecture will feature a conversation between Israeli Supreme Court Justice Elyakim Rubinstein, Professor Robert George (Princeton University), and Professor Michael Helfand (Pepperdine University School of Law):

The Annual Hanno Mott Lecture on Jewish Ethics is dedicated to exploring the intersection of Jewish Law and secular ethics . Previous lectures have addressed the End of Life debate and the religious and social implication of cloning. This years lecture will highlight Supreme Court decisions both in America and Israel that directly confront religious values in Liberal Democracies and what the relationship between these two modalities should be. This event is free and open to the public.

Details and registration can be found here.

The Hon. Kenneth Starr, President and Chancellor of Baylor University, will deliver a public lecture titled “The First Freedom: Religious Liberty in America” at Touro Law on Thursday, March 26, 2015 at 6:00 p.m. in the auditorium. The event is free and open to the public. 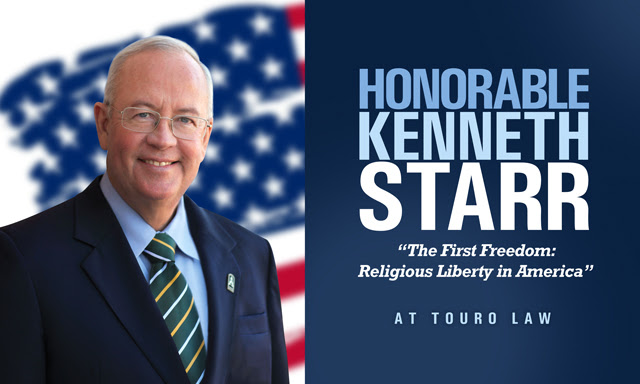 This event will be live streamed on March 26th at 6 p.m. Watch it here.

On December 3rd, New York University’s Institute of French Studies will host a lecture by Professor Vicki Caron (Cornell University), “Toward the Christian Republic: The Impact of Vatican Policy on Catholic Antisemitism on the Eve of the Dreyfus Affair.” Details are here.

Fordham University School of Law’s Natural Law Colloquium Fall 2014 lecture will be held on November 19th. Jennifer Nedelsky (University of Toronto) will speak on “Part-time for All: Creating New Norms of Work and Care.” CLE credit is available for this lecture.

Get more information and register here.

For those who might be interested, the Lanier Theological Library has made available a video of my lecture last month, “Religious Freedom for Mideast Christians: Yesterday and Today.” In the lecture, I discuss the history of the Mideast’s Christian communities, their persecution today, and what Americans can do about it.

The video is below. Thanks again to Mark Lanier and everyone at the library for hosting me!

For those who are interested, here’s a story about my lecture this month at the Lanier Theological Library in Houston, on the human-rights crisis facing Mideast Christians. Once the library posts the video, I’ll link that too. Thanks again to LTL for hosting me!

For readers in the neighborhood, I’m delighted to say that I’ll be giving a lecture, “Religious Freedom for Mideast Christians, Yesterday and Today,” at the Lanier Theological Library in Houston on Saturday, September 6:

Recently, in a city in Syria, an Islamist group imposed on Christian citizens the dhimma, the traditional “agreement” governing relations with Christians in Islamic law. According to the dhimma, Christians are tolerated as long as they pay a special tax and agree to abide by restrictions on worship and other public behavior. The dhimma governed Christians for centuries, but was abolished 150 years ago, when Mideast countries generally adopted Western models of religious equality. Its reappearance in Syria today has sent a chilling message to Christians throughout the region.

In this lecture, Professor Mark Movsesian, Director of the Center for Law and Religion at St. John’s University in New York, will discuss the religious freedom concerns of Christians in the Mideast. He will explore the historical treatment of Christians and describe the situation today. Inparticular, he will explain the current threats to Christians and explain why some observers believe the Christian communities of the Mideast are going through one of the worst periods of persecution in their history.

Details are here. Stop by and say hello!

For those in the neighborhood, San Diego Law Professor Steven D. Smith will give a lecture at Princeton on Monday, May 5, entitled “God and Caesar: Religious Freedom and the Two Jurisdictions.” Details are here. (H/T: Rick Garnett).